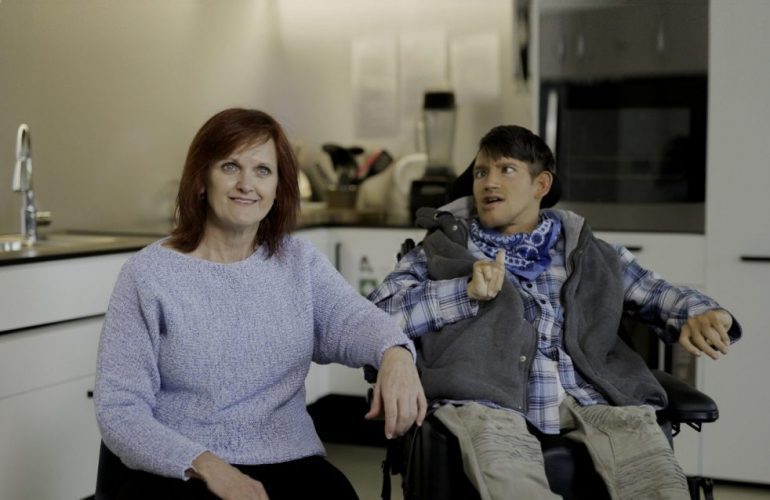 Linda and her son Trevor know the road to getting Specialist Disability Accommodation (SDA) funding isn’t always a smooth one. However, according to Linda, it has been worth the effort.

But the institutional setting resulted in Trevor losing all basic rights. He had no choice or control about how he lived: no personal belongings around him, everything done by a roster with rigid times. Even the times when visitors were able to access his home were restricted.

Over the next five years, Trevor slowly declined in health and motivation. He lost his zest for life. Trevor was stuck in a broken system.

In October 2017, I attended a Specialist Disability Accommodation (SDA) event where I learnt about Summer Housing’s Greenwich apartments. I was impressed by the speakers on the day who were living independently, and knew that Trevor would thrive in this type of environment. We submitted an expression of interest for tenancy and Trevor was given a conditional offer subject to him getting approved for SDA funding from the National Disability Insurance Scheme (NDIS).

And so, the long and arduous process of having Trevor’s SDA eligibility determined began.

I immediately submitted a change of circumstances to the National Disability Insurance Agency (NDIA). I was aware of the importance of having a thorough occupational therapist (OT) report and housing plan to support Trevor’s SDA application and so engaged an experienced OT to provide this report, at our own cost.

Over the next seven months I made relentless calls and sent numerous emails to the NDIA to follow up the progress of the application. With no response, I resorted to sitting in an NDIS office refusing to move until a planner was allocated and a review meeting scheduled.

When the plan came back, I was disheartened to learn the funding was not sufficient for Trevor, and the SDA determination not at the level corresponding with the beautiful Summer Housing apartment in Greenwich. I wrote to the NDIA and two ministers to no avail.

In 2018, Trevor was hospitalised with malnutrition, having not received adequate care at the group home. The hospital wanted to send him back to the accommodation.

There was no question that if Trevor went back he would have died. I could not let this happen.

My CEO got involved and contacted one of the same ministers I had written to and people started to listen. Trevor’s SDA for Greenwich apartments was approved!

Although it took some 12 months to receive an outcome, it was a fight worth pursuing. The strain on me of having to watch his decline and having no control in being able to fix the situation took a toll on my mental and physical health.

My relentless advocating and challenging the system made certain Trevor received adequate funding to move out of inappropriate housing, and into his own home.

Trevor is thriving in his Summer Housing apartment. He has gained weight, and his zest for life is back. He is the happiest I have ever seen him.

For the past 6 years I was attached to my phone 24/7 just waiting for the next call about what was wrong with Trevor this time! Six weeks after Trevor moved into his apartment, I was home from work when I suddenly realised my phone was still in my work bag and I hadn’t even noticed! I was overwhelmed by the idea that Trevor was again safe for the first time since he left home. I have been able to go on a holiday and for the first time turn my phone off, and trust those that are supporting him.